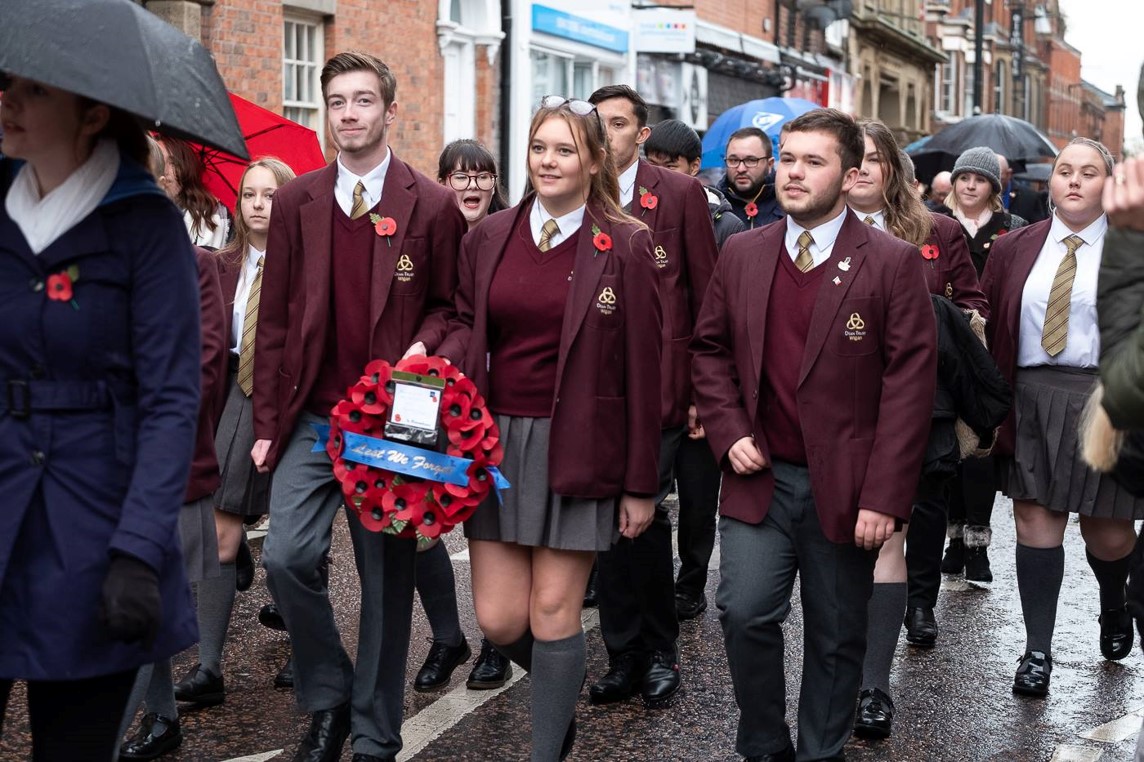 On the afternoon of Friday 9th November staff and pupils gathered in the Sports Hall for our ‘Remembrance Service’. Highlights of the service included the musical group’s performance of  ‘Amazing Grace’, the laying of Hall wreathes by senior prefects and readings by Head Boy Aaron and Head Girl Zelisha. The service also included an immaculately observed two minutes silence which began with Miss Backhouse playing ‘The Last Post’. All pupils showed great respect during the service and all joined in with the singing of the national anthem to bring the service to an inspirational close.

Thirteen Dean Trust Wigan pupils and their teachers came together on Sunday 11th November  to take part in the Remembrance Parade through a very busy Wigan town centre.  All pupils were respectful and polite, they walked proudly to the service held around the Cenotaph.  Dean Trust Wigan were the only school group in the parade and the pupils represented the school brilliantly. Head Boy and Girl, Aaron and Zelisha laid a wreath at the Cenotaph in memory of all those who lost their lives in war alongside wreaths from the Mayor, MPs, Veterans, Armed Forces, Emergency Services, Cadets and more.  Pupils also went to the church service joining in with the service, singing hymns and the national anthem. We would like to thank Mrs Stephenson for her planning and hard work in organising both the service at school, the poppy wave and joining the parade.

We have tried to capture some of the many activities pupils have been involved in, surrounding Remembrance and the 100th Anniversary of the end of WW1. Click here to take a look at photos and videos on our YouTube page.

Our pupils put their creative skills to use as part of a project to celebrate the World War One centenary.  Dean Trust Wigan  joined other community groups, schools and organisations across the borough to make poppies from used plastic bottles which are now being displayed in a cascade outside Wigan Parish Church.
The project was coordinated by Wigan Council as part of this year’s Remembrance Day commemorations.  We would like to thank our pupils, families and the DTW Community who collected hundreds of plastic bottles for the upcycling project and started work to create the poppies last month.
Mrs Stephenson, Humanities Teacher,  leading the project at DTW said: “The Poppy project is another great opportunity for us to show our support and get our pupils involved with the Centenary commemorations”
Councillor Clive Morgan, lead member for armed forces at Wigan Council, said: “We’re committed to supporting the armed forces community in Wigan Borough and want this year to be truly memorable for our veterans and their families.”

Pupils have been able to buy poppies in school as well as stationery with  all proceeds going towards the Royal British Legion Poppy Appeal.

Be part of it